Character Sketches and an Excerpt: Madd

I recently showed some sketches of Vorgell, one of the main characters in my upcoming novel Thick as Thieves. Vorgell's a fierce sex-crazed barbarian with a heart of gold when it comes to just one man. That man would be Maddog, the pretty male witch Vorgell meets when they get thrown together into a cell. They end up joining forces, but nothing comes easy to this pair of losers.

Madd was a heck of a fun character to write. He carries a chip on his shoulder that's bigger than he is. He may be small but he doesn't think of himself that way and he's determined to keep the entire world, including Vorgell, at arm's length. He'd rather bite someone's hand off than let them close enough to do him harm. Vorgell has his work cut out for him.

Here are some pics my wonderful artist Demacros worked up for Madd. 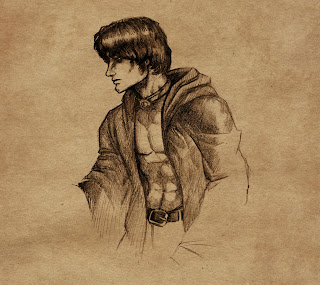 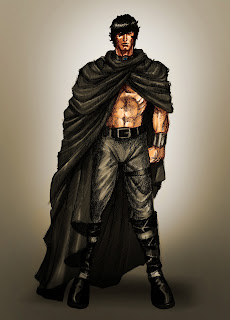 And just for fun, here's a short excerpt where Vorgell and Madd have just met and managed to escape from their prison:

Madd could escape neither the barbarian’s stench nor the pain rattling inside his skull from being bounced up and down on the man’s shoulder like a sack of ill-gotten loot. Both threatened to bring his stomach up through his gullet. Beating his fists against the brute’s solidly muscled back only left his hands bruised and inspired a tighter grip across his legs. Out of respect for possible pursuers, he’d been cooperative in not struggling or yelling until now, but at the pace the blond barbarian was running, they’d outdistanced even the hounds.

“Quiet,” grunted the brute. What was his name? Virgil? Vogull? “The Baron’s men are probably chasing us.”

“I think we’ve got enough forest between us and them for you to set me on my feet. I have two legs… I can walk!”

“You couldn’t even stand before.” That said, Vorgell—yes, that was it—stopped running and, putting his immense hands on his captive’s waist instead of his thighs, lifted him down. A long way down.

Madd’s legs, numbed by the tight hold on them, immediately buckled, and he lurched against his rescuer. Vorgell reached a brawny arm out to pull him tight against his towering body packed with muscle so dense Madd felt as though he’d just slammed against granite.

“What’s your name?” Vorgell helped him stagger forward until the blood returned to his limbs. “You might as well tell me. I already know you’re a blighted sorcerer.”

“Maddog. Madd will do.” His name was little enough to share, and the man could have left him to the soldiers—or the baron. Even the ringing in his ears and the pounding pain in his head was not too great a payment for getting away from that man.

“Here, sit down.” They’d come to a clearing thick with fallen moss-covered tree trunks. Vorgell helped ease him down onto one of the logs. “You took a nasty blow.”

Vorgell’s lips, the lower bloodied and swollen, slowly parted over large, white teeth. There was no mistaking the bulge in his trousers, or the sloppy, tattered fabric stretched over that twitching snake.

Madd groaned. “Fuck me, you’ve got to be kidding.” His head hurt, magic-laced blood tainted his mouth, and this man was suggesting he might want to ride a unicorn-enhanced stiff prick?

“It’s not my fault you’re pretty, and small—”

“I’m not small,” Madd pointed out, that being something of a sore point. “I only look small because you’re huge!”

“Which puts me at an advantage. Among my people, you’d be one of the men who keep men like me happy.”

Madd knew well enough what that meant. He’d been keeping the baron happy for months. Unfortunately, his attempt at reversing the screwing, so to speak, had not quite worked out as planned. Sure, he’d ended up in a cell and plotted a clever escape, but all that had gotten him was the company of a sex-crazed barbarian and the man’s impossibly large and erect cock, which Vorgell had freed of its tattered coverings and was displaying to him in all its glory. His tongue went silent as he stared. That cock might be a monster, but it was also magnificent… rosy, long, and thick, with a luscious, big head poking free of the foreskin and glistening like the jewel on a scepter. The only way that knob could be any shinier would be if he’d been licking it.

He was utterly mesmerized; it came as a shock to hear Vorgell still speaking to him earnestly.

“You don’t know what it was like, carrying you, feeling you all warm and nice, and the whole time all I could think about was your sweet bobbing ass. I don’t even like magic users, not usually. But you completely enthrall me. I can’t fight it anymore. Take your clothes off, or I’ll—”

“Keep your hands off my clothes!” He yanked his straw-flecked cloak tight to his body. “And you’re not getting that thing anywhere near my ass!”

“I don’t think you can stop me.” Vorgell lunged, and Madd dove headfirst off the fallen log and into a hollow filled with last season’s crumbling leaves. He barely registered the barbarian’s babble. He was frantically searching the surrounding trees, trying to find a moon oak. “You’re too little to overpower me, and I overheard the baron’s mages saying magic wouldn’t work on me, because of the unicorn horn in my blood.”

Screw me, he’s right. The giant stood over him, lust burning in his eyes. His cock dripped so heavily it looked as if he were watering the forest floor. Madd narrowed his gaze and muttered a spell. Maybe he couldn’t work magic on the unicorn-crazed oaf, but he could damn well enchant a tree.

With a resounding crack, a jug-sized burl broke from the trunk of a nearby moon oak and flew through the air. It cracked just as loudly when it slammed into Vorgell’s head. The big man blinked, staggered three steps—an amazing feat, considering—then dropped in a heap.

Madd rose, brushing leaves and litter from his cloak, and pondered his fallen nemesis. Vorgell was still breathing and, given the magic in his blood, would recover quickly. Until then… yes, Vorgell’s cock was still at full mast. Madd smiled. He could definitely do something with that, but he would have to be careful. Magic, even in the form of a lusty and beautiful cock, could be dangerous.